Continuing on with the story about the land mass distortions, my friend and I Ire also talking about how many of the immigrants in Australia came from different nations across the world and how different things are for them now. In general, the demographics from the different countries are  varied, completely different from Australia, and I thought it would be interesting to do a comparative study.  This is not a comprehensive study – merely something of interest for us. Perhaps one day I will increase the scope. For this study I included the islands of Tasmania, Sri Lanka, Madagascar, Iceland, New Zealand, Fiji, New Caledonia, Vanuatu and Greenland. These were selected because they are of particular interest to me. I initially also included Papua New Guinea but removed it because of various issues with the available data and its interpretation.
The story is best told by a few graphs. I will let those speak for themselves (for the most part), but first a word about the data. The data in this study comes from Wikipedia for the most part but, I did compare it with data from individual countries and the numbers are all in the right ballpark – good enough for my purpose here.

This first graph just shows the land masses.  From the previous blog we know that Madagascar is about a fourth the size of Greenland, so what’s up with the graph? I wanted to have a realistic comparison, so I considered the fact that Greenland’s interior is really uninhabitable. So I tweaked all the data to removed the areas which are uninhabitable.  For Greenland these are areas that are (currently) covered with ice, leaving a smaller but still sizable area. The rest of this story is told by the graph itself.

The next graphic does not require much explanation – these are pure population numbers.  But do take note of how these countries compare to one another – and also pay attention to the differences with this and the previous graphic. Notice how Sri Lanka has moved from 6th place to second.

I also wanted to represent these three datasets in one graph, just to get a normative perspective of what is really going on. And this is it. I normalised all the data to a weighted average in order to display them together on this bar chart. It puts a lot of this discussion in a nice perspective. The graph tells the rest of the story. 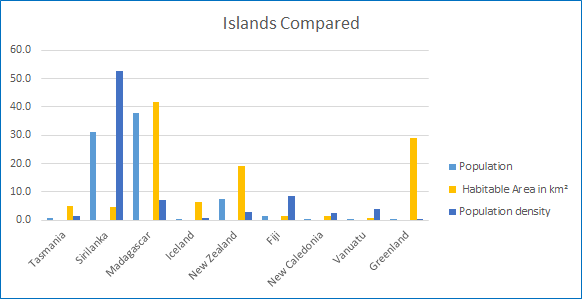 A while ago, I was chatting with a friend who originally came from Sri Lanka.  A part of the discussion focused on how modern mapping tools have created the wrong perceptions about different countries and landmasses.  This blog is just sharing the story of that discussion.

The first part of the story has to do with the perception of the sizes of different land masses.  The best example to illustrate this issue relates to the island of Greenland.
Greenland is a big island, but projection issues has created the concept in people’s minds that it is really massive – bigger than what it really is. Even if you know that the (Mercator) projection distorted it, you don’t really know how big it is relative to other land masses. To illustrate, I compare it with the islands of Australia and Madagascar. My first image was created by grabbing the three landmasses from Google Maps at the exact same zoom level. Notice how Australia fits right into Greenland. And Madagascar almost disappears inside Greenland. Yet we know that
• Australia is about 7,692,024 km²
• Greenland is about 2,166,086 km²

In the next graphic I used a more appropriate projection to show the land masses in correct perspective.  Note how Greenland’s shape is completely different but the proportions are correct.  Greenland is only about four times bigger than Madagascar. (I did not include Australia – it is way too big!)

The truth is, we always have to double check the ‘facts’.  We can easily be deceived, sometimes by people who purposefully try to deceive us, but sometimes by the unintended distortions of reality.